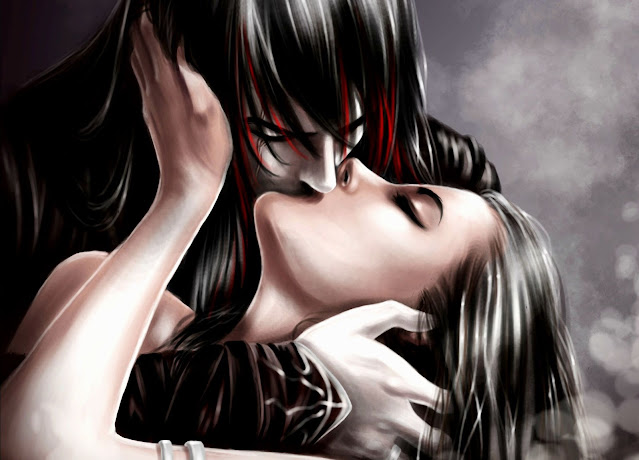 Episode 1
My heart was racing. It was hammering in my chest like it was about to break free of my rib cage. My breath was fast through my parted lips and my body was on fire.


I was sprawled across the longest, softest leather couch you could possibly image, arms and legs tangled around the most incredibly handsome man you could possibly imagine. His body pressed against mine in a teasing, rhythmic pattern, reminding me that it had been quite awhile since more than just his rough denims had rubbed against me. His breath was equally fast in my mouth. And his heart, if it still had a beat, would have been racing as well, I was sure.


But it had been a long while since his heart had beaten its last beat. Almost five years to be exact. And while his skin was cool and his tongue was icy, he was masterful with both, and more than made up for the temperature difference.


The harsh roughness of his stubbled jaw brushed over mine and I contained a moan. I loved that. My overly sensitive skin could feel and hear each grain of course hair; it electrified me. His cool lips shifted to my neck, and fangs pricked against my skin. I almost begged him right then and there to do it, to pierce my flesh and taste my blood. He would have loved it, I would have loved it, but I resisted, instead only squirming with a growing desire.


A cool palm ran up one side of my body, up my hip and along my breast. His thumb circled over a nipple and my head dropped back as I contained another groan. I could feel his lips curve into a smile as he pressed them into the indentation of my collar bone. His hip lightly digging into my thigh made his readiness for me all too obvious, even if I'd only been a standard human.


But I wasn't a standard human, not anymore, and he had never been one to begin with. He was a vampire, or as he'd first told me, a little bit vampire. Born into the life, it was just the way he'd always been and always would be. Me? I'd been bitten by some jerk-off vampire with an attitude problem. The man currently running his nose up my jaw was the man who'd saved me. My husband. Teren Adams.


He'd given me his blood, only wanting to heal me. What he'd ended up doing was changing me, making me "a little bit vampire," just like him. It was an odd, complicated process that others far more knowledgeable about vampire anatomy understood, but for all intents and purposes, I was vampire and human, a mixed breed. I enjoyed sun, mochas and silver jewelry. I moved blindingly fast, had hearing that was nearly too good at times, and most of all, I loved blood. No, love is too insignificant a word. I wasn't out killing people for it or anything, but if I was forced to choose a last meal, that would be it.


But I had a heartbeat and I was still alive.


I also had fangs, just like my husband. Releasing the constant hold on them that I had to keep, I let them drop down into the position they always wanted to be in - drinking position. Shifting my head, I drug my teeth along Teren's neck. He loved that too.


He sucked in a quick breath and let out a small groan. "Stop that," I muttered. "We're being discreet, remember."


One of his hands pinched my nipple and I bit back my own moan, stopping it just short of making a noise. He chuckled, lowering his lips to mine, where that marvelous tongue made it hard to remember why I couldn't shift his hips over just a smidge, so he was in a much more satisfying spot.


One of Teren's hands, the one not actively involved in caressing my body, was making a repetitious pattern through the air: lift, stop, pull back, extend. He did it over and over again. The move would seem pretty strange, if you didn't understand what he was doing. I contained a chuckle, thinking about what he was doing. To an oblivious set of toddlers, he was idly playing catch while at the same time making out with me. Multitasking at its finest.


His arm was coming up, his hand catching a sloppily tossed ball, and chucking it into the other room, where two sets of feet would shuffle off for it, giggling the entire time they raced to beat the family dog to the favored object. Teren used his super acute hearing to track the ball, and the sense in our blood, to tell him exactly where the children were. Since he didn't need his eyes, lips, and one of his hands for that, he was focusing those parts of his body on me.


We reveled in soft, heated kisses while I mentally tracked how many minutes were left until bedtime. More than a few, less than too many. Our two miracle children - miracle that we'd conceived them before Teren's aforementioned silent heart had stopped, and miracle that we had found a way to keep mine from stopping before they were born - were laughing as they played with Spike and Daddy.


Nika and Julian, the other two loves of my life. They were perfect, precocious three year olds.


Suddenly the children grew tired of their game with Daddy and decided to crawl up his legs. He broke off from kissing me and looked down at them. Laughing, he shifted his position, so that he was nestled in-between me and the couch. That signaled an end to the foreplay, for now, until we had a more private place to explore each other.


Reaching down for them, they giggled more and crawled up into our arms. Sighing contently, my passion faded and an overwhelming love swept in. Teren sighed in a matching way, one of his arms sliding under me while the other wrapped around Nika and Julian on my chest.


Nika giggled, listening to my heart. "Mommy, you're loud." I laughed and squeezed her tight, giving Teren a wry smile. He grinned, suppressing a laugh.
_________