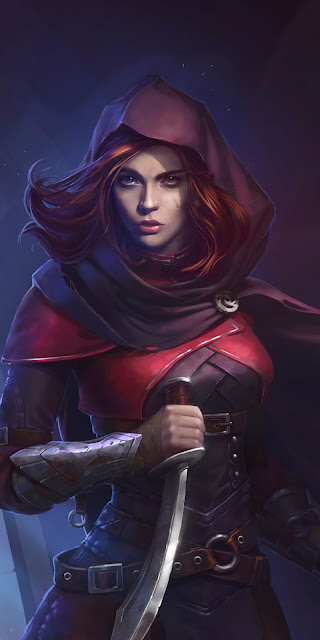 
Dorian walked past the black tents of the carnival, wondering for the umpteenth time if this was the greatest mistake of his life. He’d lost the nerve to come yesterday, but after yet another sleepless night, he’d decided to see the old witch and deal with the consequences later. If he wound up on the executioner’s block because of it, he’d surely kick himself for being so brash, but he had exhausted every other way of finding out why he was plagued by magic. This was his only option.

He found Baba Yellowlegs sitting on the back steps of her giant wagon, a chipped plate heaped with roast chicken parts resting on her knees, a pile of clean-licked bones littering the ground below.


She lifted her yellowed eyes to him, iron teeth glinting in the noontime sun as she bit into a chicken leg. “Carnival’s closed for lunch.”


He swallowed his irritation. Getting answers relied on two things: being on her good side, and her not knowing who he was.


“I was hoping you’d have a few moments to answer some questions.”


The chicken leg cracked in two. He tried not to cringe at the slurping sounds as she sucked out the marrow. “Customers who have questions during lunch pay double.”


He reached into his pocket and fished out the four gold coins he’d brought. “I hope this will buy me all the questions I want—and your discretion.”


She chucked the clean half of the leg onto the pile and set to work on the other, sucking and gnawing. “I bet you wipe your ass with gold.”


“I don’t think that would be very comfortable.”


He leaned in close enough to set his gold on the top step beside her, keeping well away from her withered form. She smelled atrocious, like mildew and rotted blood. But he kept his face blank and bored as he pulled back. The gold vanished with a swipe of a gnarled hand.


Dorian glanced around. Workers were scattered throughout the carnival, all of them settled down for the midday meal wherever they could find seats. None of them, he noticed, sat anywhere near the black-painted wagon. They didn’t even look this way.


She picked up a chicken wing. Crack. Crunch. “The lastborn witch of the Witch Kingdom.”


“That would make you over five hundred years old.”


“So it’s true: witches really are blessed with the long lifespans of the Fae.”


She tossed another bone at the foot of the wooden steps. “Fae or Valg. We never learned which one.”


Valg. He knew that name. “The demons who stole Fae to breed with them; which made the witches, right?” And, if he recalled correctly, the beautiful Crochan witches had taken after their Fae ancestors—while the three clans of Ironteeth witches took after the race of demons that had invaded Erilea at the dawn of time.


“Why would a lordling as pretty as you bother yourself with such wicked stories?” She peeled the skin off the breast of the chicken and guzzled it down, smacking her withered lips together.


“When we’re not wiping our asses with gold, we need to find some way to amuse ourselves. Why not learn a little history?”


She didn’t even look up from her plate. “Your kind of magic is gone, yes. But there are other, forgotten powers that work.”


“Powers that lordlings have no business knowing. Now ask your next question.”


He gave her a playful, wounded face that had the old woman rolling her eyes. She made him want to run in the other direction, but he had to get through this, had to keep up the charade for as long as he could.


“Could one person somehow have magic?”


“Boy, I’ve traveled from one shore of this continent to the other, across every mountain, and into the dark, shadowy places where men still fear to tread. There is no magic left anymore; even the surviving Fae can’t access their powers. Some of them remain trapped in their animal forms. Miserable wretches. Taste like animals, too.” She laughed, a crow’s caw that made the hair on the back of his neck rise. “So, no—one person could not be the exception to the rule.”


He kept up his careful mask of idle boredom. “And if someone discovered that they suddenly had magic …?”


“Then they’d be a damn fool, and asking for a hanging.”


He already knew that. That wasn’t what he was asking. “But if it were true—hypothetically. How would that even be possible?”


She paused her eating, cocking her head. Her silver hair gleamed like fresh snow, off setting her tanned face. “We don’t know how or why magic vanished. I hear rumors every now and then that the power still exists on other continents, but not here. So that’s the real question: why did magic vanish only here, and not across the whole of Erilea? What crimes did we commit to make the gods curse us like that, to take away what they had once given us?” She tossed the rib cage of the chicken onto the ground. “Hypothetically, if someone had magic and I wanted to learn why, I’d start by figuring out why magic left in the first place. Maybe that would explain how there could be an exception to the rule.” She licked the grease off her deadly fingers. “Strange questions from a lordling dwelling in the glass castle. Strange, strange questions.”


He gave her a half grin. “Stranger still that the lastborn witch of the Witch Kingdom would stoop low enough to spend her life doing carnival tricks.”


“The gods that cursed these lands ten years ago damned the witches centuries before that.”


It might have been the clouds that passed over the sun, but he could have sworn that he saw a darkness gleaming in her eyes—a darkness that made him wonder if she was even older than she let on. Perhaps her “lastborn witch” title was a lie. A fabrication to conceal a history so violent that he couldn’t imagine the horrors she’d committed during those long-ago witch wars.


Against his will, he found himself reaching for the ancient force slumbering inside him, wondering if it would somehow shield him from Yellowlegs the way it had from the shattering window. The thought made him queasy.


“Any other questions?” she said, licking her iron nails.


He walked away, and got no farther than the nearest tent when he saw the sun glinting off a golden head, and Roland walked toward him, away from the table where he’d been talking to that stunning blond musician who’d played the lute the other night. Had he followed him here? Dorian frowned, but gave his cousin a nod in greeting as Roland fell into step beside him.


“Getting your fortune read?”


Dorian shrugged. “I was bored.”


Roland looked over his shoulder to where Baba Yellowlegs’s caravan wagon was parked. “That woman makes my blood run cold.”


Dorian snorted. “I think that’s one of her talents.”


Roland glanced at him sidelong. “Did she tell you anything interesting?”


“Just the normal nonsense: I’ll soon meet my true love, a glorious destiny awaits me, and I’ll be rich beyond imagining. I don’t think she knew who she was talking to.” He surveyed the Lord of Meah. “And what are you doing here?”

“I saw you heading out and thought you might want company. But then I saw where you were going and decided to keep well away.”


Either Roland was spying on him, or he was telling the truth; Dorian honestly couldn’t tell. But he’d made a point to be pleasant to his cousin during the past few days—and at every council meeting, Roland had backed whatever decision Dorian made without hesitation. The irritation on Perrington and his father’s faces was an unexpected delight, too.


So Dorian didn’t question Roland about why he’d followed him, but when he glanced back at Baba Yellowlegs, he could have sworn the old woman was grinning at him.


It had been a few days since Celaena had tracked her targets. Cloaked in darkness, she stood in the shadows of the docks, not quite believing what she was seeing. All the men on her list, all the ones she’d been following, the ones who might know what the king was up to—were leaving. She’d seen one of them sneak into an unmarked carriage and had followed him here, where he’d boarded a ship set to depart at the midnight tide. And then, to her dismay, the other three had shown up, too, their families in tow, before they were quickly ushered belowdecks.


All those men, all that information she’d been gathering, just—

“I’m sorry,” a familiar voice said behind her, and she whirled to find Archer approaching. How was he so stealthy? She hadn’t even heard him getting close. “I had to warn them,” he said, his eyes on the ship getting ready to depart. “I couldn’t live with their blood on my hands. They have children; what would become of them if you handed over their parents to the king?”