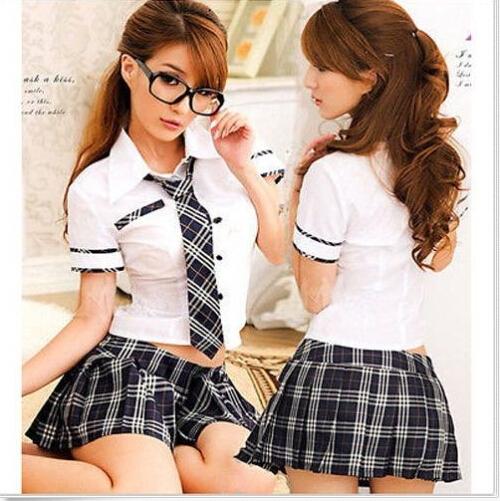 I was woken by the loud shrill of an alarm clock. As I grimaced, my eyes caught Zane smirking. It was his alarm clock, too!

"You're just fucking hilarious when you wake up," he chuckled out. Rolling my eyes, I stood up and walked to the dresser. "You won't need that, Drew."

His joking tone caused me to swirl around to face him. "Why not?"

"This school has a uniform." I should've seen that one coming. It's a boarding school, for crying out loud - why wouldn't there be uniforms? At my reaction, Zane laughed. He stood up and walked to a closet. My eyebrow rose as he pulled out a gray button-up T-shirt, a red and yellow striped tie, as well as a pair of light blue pants. Basically, the traditional school uniform. A
boy's uniform.

"Hey, it's either this or nothing. Take your pick." His eyebrow wiggled. We laughed as I snatched the attire from his hands.

"I'd rather take this, thank you," I snickered. He opened the door to a separate room to allow me to change.

The entire outfit was quite large on me. Zane was obviously taller than me, and he had more muscle.

Adam, Noah and Zane were all ready and waiting for me when I exited the small room. They were talking about God knows what.

The three snapped their heads in my direction.

Adam teased. I punched his arm - quite hard, I might add - and he flinched.

"Damn!" Zane and Noah said in unison. Placing my palms together in front of my chest, I smiled sweetly while singing a note in an opera voice. The four of us laughed loudly down the hall.

By some miracle, all of my classes were with my new friends. How awesome was that?

Our first class turned out to be my all-time-least-favorite: Technology. How screwed up is that? This is a school for juvenile delinquints; who in their right mind would allow classes where some smart-ass could make a bomb or something? Idiots!

The second I stepped into the large classroom, all eyes were on me. I bit my lip to hold back the warmth that threatened to pervade my cheeks. My new teacher glanced up at our group to see why everyone was silent. He walked over to me.
"Hello, Drew Finch. I'm Mr. Donlon; your Technology teacher."

Obviously. Mr. Donlon pointed to a seat between two boys whom I'd never met. Zane, Adam, and Noah had already sat down. When they saw where I was headed, their eyes widened.

'Blade and Axel,' Zane mouthed back. The reply caused me to cringe as I sat in my seat. Blade Hernandez and Axel Cooper: two of the sexual assaulters at this school. Fun...

Nervous, I glanced back and forth between the two. A corner of Blade's lip curled up - as if he were smirking at my actions. My ears detected Axel snort on the other side of me. Crap! I gulped, trying to focus on the teacher. However, the little things the two boys did kept me distracted. Just what they need: an innocent girl to prey on.

After class, I stood up as swiftly as possible. The chair ended up crashing to the floor with a loud bang. Blade lifted it back to it's original position.

"Thanks," I muttered as I started to walk towards my friends.
"It's Drew, right?" Blade's tone had an uncomfortable touch to it. Hastily, I nodded.

"She seems a bit too nice to resist," Axel said, licking his lips slowly and seductively. It was hard to tell whether he meant that I was too nice to rebuff them or if I was too nice for them to resist me. Either way, I wasn't staying to find out. I scurried to Noah, Zane and Adam.
"Assholes," the three mumbled as they shoved me out the door.
_____