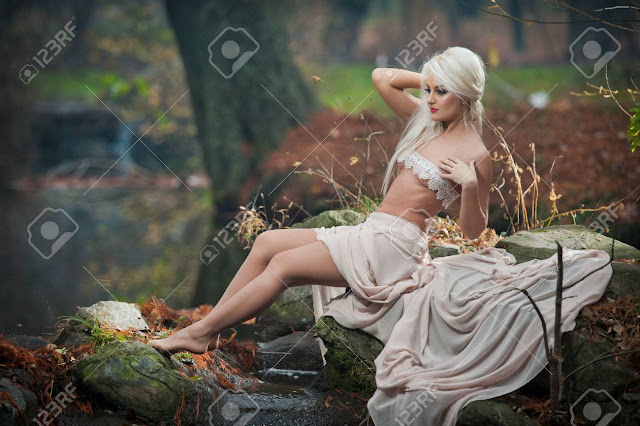 She understood that Charles was behaving like this because he was a little jealous. She was not a sentimental woman. Though she was unable to shy away from things with Sam, she also didn't hope Charles would misunderstand her, so she wanted to explain it to him clearly before going home.

"What's wrong?" Charles stopped the car and looked at Autumn.

"Let's take a walk." Located in the heart of the city, the Central Park was a quiet and relaxing place in this bustling city.

In the early summer days, the city was like a blooming flower. It was gorgeous and colorful. The lovers used to come here to take a walk at the lakeside.

Autumn stared at the lovers at the lakeside and wondered how to explain things to Charles.

"You......" Coincidently, they spoke in unison. Then they took a glance at each other and smiled fondly.

"What do you want to talk about?" Autumn said with a smile to Charles while he hesitated for a while and then said, "Can you keep at a distance from Sam?"

Autumn said with a smile to Charles while he hesitated for a while and then said, "Can you keep at a distance from Sam?"

"Why?" Autumn asked. Perceiving his serious expression, Autumn decided to joke a bit with him. "Sam grew up with me. I know him since my childhood days. He always took great care of me. Moreover, he is Chris's boss, so how can we not meet?" Autumn replied.

"Did Sam offend you before?" Autumn glanced at Charles curiously, and found that he looked a little awkward. "Why do you hate him so much? "

"Anyway, I won't permit you to meet him again." Charles said peremptorily.

Autumn was amused by his words.

It was impossible to see any other expression on Charles's face except for calmness. But now Autumn could easily tell that he was jealous. This startled her.

"Are you serious?" She kept joking with him.

He was determined to give her a small "punishment" since she was so complacent.

"Are you crazy?" Autumn complained while blushing long after Charles released her.

Though it was a good place for lovers to date and it was natural for people to kiss here, Autumn still felt embarrassed kissing in public.

It turned out that she shouldn't play any trick on him.

"You are my wife. Why can't I kiss you? Charles was a bit complacent now while he looked at her flushed cheeks.

It took Autumn a long while to react. They sat on the bench by the lake together while Autumn asked Charles, "Don't you have any questions to ask?"

Charles shook his head slightly. "I trust you." He replied.

He looked at Autumn quietly and then added, "I would like to listen attentively to you if you are ready to talk to me. But if you are reluctant to tell me anything, I won't force you.  After all, everyone has a past."
When Autumn heard that from Charles she was moved. "In fact, I can tell you every chapter of my story."

She sighed slightly and then told her story involving Sam to Charles.
From the age of six to seventeen, she played with Sam when she was living with her grandma. Sam's mother, Jane also treated her well since Autumn was an adorable girl.

Jane would always help her financially because she somehow pitied Autumn for her miserable life experiences.

Autumn thought things would go on like this. However, after spending so much time together, the two young hearts got close and finally they fell in love with each other.

Jane didn't approve of their relationship. What's worse was that she regarded Autumn as a scheming girl. Jane thought that it was Autumn who tried every means to seduce Sam so as to change her miserable fate.

Autumn was confused. She didn't understand how Jane could change her attitude towards her so abruptly.

Autumn explained that she never cared about Sam's money. All she really cared was if Sam would treat her considerately.

But unfortunately even when Autumn tried to explain everything to Jane, she turned a deaf ear to her. Jane even tried every means to separate Sam and Autumn.

When Autumn was seventeen, Jane threatened Sam to break up with Autumn or she would kill herself.

Sam had no choice but to leave Autumn for his mother.

Since then Autumn never saw him again.

On the day he left, it was raining cats and dogs. Autumn ran after his car and kept calling him and sending him messages, but he just disappeared from her life completely as if he was never a part of her life.

Autumn got seriously ill after that day. But after she pulled through, she tried her best to forget Sam, so his name turned out to be a taboo in her life for a long time.

As time passed, Autumn finally let him go from his heart.

She imagined how it would be like to meet Sam again but she never expected that they would meet in this manner.

Autumn thought that she would feel grieved if she met him again, but she realised that she had already let him go the moment she saw Sam again.

As she told this story to Charles, Autumn looked composed. But she didn't utter a word about her real identity. As soon as she finished her words, Charles embraced her into his arms with sadness.

It was because he knew her real identity, so he felt sorry for her miserable life experiences. Now Charles realised how many hardships she had gone through in her life.

Autumn got close to him subconsciously. Though the breeze was warm, she felt cold somehow.
Charles said in a soft voice, "Autumn, I am not going to leave you no matter what happens in the future."

"Let's go." Charles stood up and held her hands. "I am hungry. Let's eat something."

"But I still want to know, how did you know that I was there?" Autumn asked him while Charles took a glance at her mysteriously and said, "I have installed a GSP on you, so you don't ever leave me alone in future."

Of course, Charles was just joking with her. Autumn didn't make a detailed inquiry since she perceived Charles was reluctant to tell her.

Hand in hand, they walked slowly as every other ordinary couples in the world. Autumn felt that she was that seventeen year old teenager again and she told him about the things that happened recently.

"Charles.  I think Chris likes Sam. If they will be with each other in the future......"

"It is impossible!" Charles replied firmly. "I don't like that guy and I definitely won't allow him to be a part of my family."

It reminded him of the call from Chris. Without that call, Charles would still be busy with his business engagement now.
_____