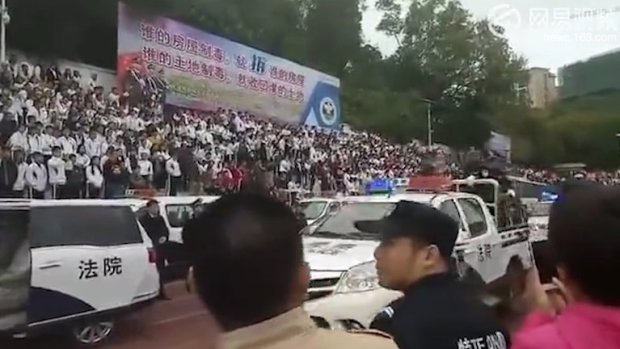 Ten criminals have been executed in front of crowds of thousands of people for dealing drugs, murder and robbery. They were taken to a sports ground in Lufeng, southern China, after being sentenced by two separate courts in the province.

It is the third time that death sentences have been carried out in such a public manner since June. They have opened up a debate in China with some describing them as ‘inhumane’ and ‘insulting’. However, local authorities say that the executions are being carried out publicly to educate people against committing crimes.

Among the crowds of people watching the deaths of the 10 convicts were children. A total of 12 people were sentenced ahead of the execution on Saturday with 10 of them being given the death penalty in front of crowds of people, according to footage on 163.com.

Seven were drug dealers while the rest were convicted of murder and robbery.

Their sentences were read out during the rally, but it is believed that they were aware of their fate ahead of the day of executions. In November three drug dealers were killed in front of 1,000 people and in June another 10,000 people witnessed the execution of 13 drug dealers.

According to a book entitled Crime, Law and Social Change said the rallies ‘are a format in which the emotive representations of public shaming and gestures of moral indignation can be acted out.’