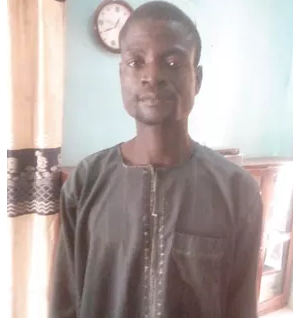 The police in Niger state has arrested 50-year-old Tanko Bamaiyi, pictured above, for allegedly killing his 30-year-old wife of 10 years, Auta, because she refused to serve him food at their home in Maigoge village in Mariga Local Government Area of Niger State


According to reports, on the day of the incident, the suspect had an argument with his wife over food and in the middle of the argument, he picked up a machete and hacked her to death. After the attack, he threw the matchete into river.

Speaking to newsmen while he was paraded, the suspect said

“In the heat of argument I used my cutlass (machete) and killed her. My wife was fond of not giving me food in time and when I complained, she will abuse me. She never gave me food each time I asked for it. She even asked my 10-year-old daughter to abuse me because I was asking for food and whenever I want to correct the girl, she will abuse me. I lost my temper. I am sorry, extremely sorry for what happened. It is the act of the devil and I pray my in-laws will find a place in their hearts to forgive me. I regret all of my actions.”

The acting Public Relations Officer (PPRO), of the state command, Peter Sunday, said the suspect will soon be charged to court.